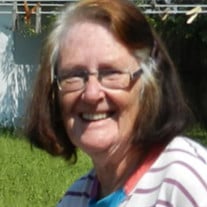 Alice Mary Bennett succumbed to Alzheimer's at age 78, entering paradise on 29 July 2019. Alice was the loving daughter of proud parents Howard and Helen Costello (both deceased), South Ozone Park, Queens New York. Alice was born 11 May 1941 at 6:45 a.m. in Brooklyn, New York and christened at the Roman Catholic at St. Alphonsus's Church on Kent St. Brooklyn NY, as witnessed by family and sponsors, Wm. Portman and Sophie Lobatt, 15 June 1941. Alice is the sister of Howard (deceased), and Stanley M. Costello. They lived in Greenpoint Brooklyn prior to moving to South Ozone Park Queens NY, NY. Alice received First Holy Communion at St. Alphonsus Church on 22 May 1949, and the Holy Sacrament of Confirmation in the Church of Our Lady of Perpetual Help 19 November 1952 by Father Flynn. Alice married Howard Hill Bennett Jr. of Valparaiso Indiana on 30 April 1960 being blessed with five children Alice M., Howard III (deceased), Tony M., Kathleen S., and Richard. Alice provided love and care to her family and also to many within her community through nursing practices and civic involvement. Alice and family moved to New Smyrna Beach (NSB), Florida in the early 1970's where she continued her medical career and family care. Alice and her family also lived in West Palm Beach Florida for a period. Out of love for her grandchildren and great grandchildren Alice moved to N. Jersey St., Portland Oregon for several years. Her grandchildren are Christina McKenna, Noah Cain, and Jared Cain. Her great grandchildren are Adrian, Brennen, and Caiden McKenna. Most recently she welcomed Noah's addition to the loving lineage of great grandchildren. Alice shared her beautiful voice in worship to God at Sacred Heart, NSB, and also the First Baptist Church of NSB. Her voice strongly resembled that of the late Patsy Kline, always a delight. She remained close to God, recommitting herself in baptism at the First Baptist Church of NSB in the mid-late 70's. Alice continued to enjoy the fellowship of community churches through her life's journeys. Throughout her life, when enjoying glimpses of time to herself, Alice immersed herself in mystery novels and television shows of intrigue. Alice's enormous heart of compassion is only matched by her sense of humor. Her civic commitment continued in her later years in both NSB FL and Portland Oregon actively supporting members. Some of Alice's club memberships included: Fraternal Order of Eagles #3426, AMVETS Ladies Auxiliary #0911, Women of the Moose #1515, American Legion Auxiliary #134. She believed in recognizing the sacrifice of the brave men and woman given to her country and freedoms. Her heart was given to care, self-sacrifice, and charity of others. Over her thirty plus year medical career Alice successfully became a Licensed Practical Nurse January 1979. Alice's earliest medical care employment began at Brookhaven Memorial Hospital, Brookhaven NY, then after moving to Florida, at Bert Fish Memorial and Halifax Hospital Lake Okeechobee Hospitable. Alice retired from Bert Fish Memorial in 2006. She missed the comradery of her friends and the love of patients, particularly the infant care ward, but life's flow led her to connect with her grandchildren and great grandchildren in Portland Oregon. In declining health from Alzheimer's, Alice continued to live life to its fullest through family and civic involvement until briefly returning to New Smyrna Beach, Florida. Regrettably the illness increasingly robbed Alice of her life's memories, profoundly in October 2017, whereby she was admitted to a memory care facility in Johnson City, Tennessee, family nearby. Subsequently she was transferred to the compassionate of nursing home care in Erwin TN. Although we all grieve her loss, we celebrate Alice's life and the richness she's brought family and community. Her family is proud of the legacy and large shoes she has left to fill. Alice, mom, grandmother and great grandmother is our gold standard. We know today she's sharing her beautiful voice with the Angels of God in Paradise. Celebrate Alice once again being whole in God's presence and remember all she's given fondly. Alice's love of animals and children as her common theme. Donations are not required but if you feel compelled, please send a charitable donation to St. Jude Children's Research Hospital, 262 Danny Thomas Place, Memphis, TN 38105; Port Orange VFW, 5810 S Williamson Blvd., Port Orange, FL 32128; or to your local animal shelter on her behalf. Condolences and memories may be shared with the family and viewed at www.valleyfuneralhome.net or on Facebook at https://www.facebook.com/ValleyFuneralHomeErwin. These arrangements are made especially for the family and friends of Alice Mary Bennett through Valley Funeral Home, 1085 N. Main Ave., Erwin, 423-743-9187.

The family of Alice Mary Bennett created this Life Tributes page to make it easy to share your memories.

Send flowers to the Bennett family.