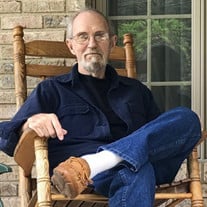 Bailey "Bay" Duane Hansen, 81, of Erwin, TN, passed away on Monday, March 25, 2019 at Unicoi County Hospital. Born in Waukegan, IL, Bailey was the son of the late Paul and Una (Peterson) Hansen. He was a member of the VFW and Moose Club in Erwin. He is preceded in death by his wife Priscilla in June 2011. He was honorably discharged from the US Air Force Reserve. Bailey leaves behind to cherish his memory, his daughter Jodi, Erwin, TN, and sons Kris Hansen of FL, and Kurt Hansen, Lafayette, CO by his former wife Karen Garland of San Jose, CA. His Step-son through Priscilla, Steve Anderson of Westbrook, ME. His brothers Eric Hansen, of Tavares, FL, Mark Hansen of Scottsdale, AZ, and Brian Hansen of Boulder, CO. He is also survived by his beloved grandchildren Annika Hansen by Kris Hansen. Ryan Hansen by Kurt Hansen. Bailey, Blair, Sydney and Jake Gartley by Jodi Gartley, and Erin, Elyssa and Cassaudra by Steve Anderson. Bailey graduated from Waukegan Township High school in 1955. Soon after graduation he joined Commonwealth Edison as a meter reader and later as a lineman for most his 35 years with ComEd. At the time of his retirement he was a facility manager at Zion Nuclear Power Plant. After his retirement he moved to Erwin, TN where he and Priscilla built their lovely home. Most of the construction was done by Bay. In their basement there was a large work area to work on his cars and motorcycles, as well as a complete woodworking shop. His carvings large and small are known throughout the country and Austria where he attended advanced woodcarving school. Bay understood a piece wood like Michelangelo understood a piece of marble. There was a figure in the wood that he exposed and brought to life. He loved to give his carvings to friends and family. Some of his carvings won national recognition, including a life-size carousel horse. Bay enjoyed the outdoors immensely, especially the mountains and oceans. He enjoyed hunting in the Rocky Mountains, frequently bagging his limit of deer and elk. He loved travel, adventure, fast cars and motorcycles. Bay could fix anything that ran on gas or electricity. He made his own tools and knives. Bay was a hard worker with a strong will to complete what ever he started. Bay was available to help whenever anyone needed help, wanted nothing in return. Bailey was a master story teller which always held the attention to all those in his presence. He was a strong and loyal friend to many and will be greatly missed. In lieu of flowers, memorial donations can be made to the Unicoi County Animal shelter, 185 North Industrial Drive, Erwin, TN 37650 A memorial service will be held at a later date in Zion, IL Condolences and memories may be shared with the family and viewed at www.valleyfuneralhome.net or on Facebook at https://www.facebook.com/ValleyFuneralHomeErwin. These arrangements are made especially for the family and friends of Bailey "Bay" Duane Hansen through Valley Funeral Home, 1085 N. Main Ave., Erwin, 423-743-9187.

Bailey "Bay" Duane Hansen, 81, of Erwin, TN, passed away on Monday, March 25, 2019 at Unicoi County Hospital. Born in Waukegan, IL, Bailey was the son of the late Paul and Una (Peterson) Hansen. He was a member of the VFW and Moose Club in Erwin.... View Obituary & Service Information

The family of Bailey Duane Hansen created this Life Tributes page to make it easy to share your memories.

Send flowers to the Hansen family.