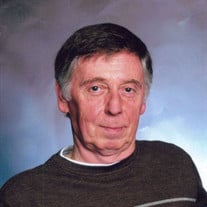 Charles "Hammer" Walter Lewis, age 70, of Erwin, passed away on Wednesday, April 11, 2018 at the Center on Aging and Health. A native of Erwin, Charles is a son of the late Walter C. and Pansy (Tapp) Lewis. He was a Conductor and Yard Crew Foreman at CSX Railroad for 38 years and a member of Fishery Community Church for many years. Mr. Lewis was a proud veteran of the United States Army, having served in the Vietnam War. He enjoyed hunting, fishing, camping and bluegrass music. In addition to his parents, Mr. Lewis was preceded in death by his first wife, Joyce Ann (Wright) Lewis and his son, Chadwick Franklin Lewis. Charles "Hammer" Walter Lewis has left behind to cherish his memory: Wife of 11 years: Robbie (Gentry) Lewis, of Erwin; Step son: Lynn Jones and wife, Tammie, of Knoxville; Grandchildren: Austin Tyler Jones, and wife, Jennifer, Ashlynn Paige Jones, Tyger Luke Jones; Great grandson: Auden Greyson Jones; Brothers: Billy "Garth" Wayne Lewis, of Erwin, Jimmy Lewis and wife, Kathy, of Johnson City; Sister: Carolyn Harris, of Erwin; Sister-in-law: June Humphrey and husband, Danny, of Erwin; Special friends: Wilbur and Mary Lingerfelt and family, Angela Moss and son Samuel, William Bill "Smitty" Smith, of CA; Joel and Teresa Tittle and daughter, Allison, of Unicoi, All of his co-workers at CSX Railroad. The family would like to offer special thanks to Mark Peterson and staff at Erwin Physical Therapy; Josh and Bill Lloyd for their support, home maintenance and friendship; the staff of Center on Aging and Health and the nurses and CNA's on the fifth floor at Johnson City Medical Center for their love and care. The family respectfully requests the honor of your presence as we offer tribute and remember the life of Charles "Hammer" Walter Lewis in a committal service to be held at 11:00 AM on Saturday, April 14, 2018 in Evergreen Cemetery. Those attending will meet at Evergreen Cemetery by 10:50 AM on Saturday for the service. Condolences and memories may be shared with the family and viewed at www.valleyfuneralhome.net or on Facebook at https://www.facebook.com/ValleyFuneralHomeErwin. These arrangements are made especially for the family and friends of Charles "Hammer" Walter Lewis through Valley Funeral Home, 1085 N. Main Ave., Erwin, 423-743-9187.

Charles "Hammer" Walter Lewis, age 70, of Erwin, passed away on Wednesday, April 11, 2018 at the Center on Aging and Health. A native of Erwin, Charles is a son of the late Walter C. and Pansy (Tapp) Lewis. He was a Conductor and Yard Crew... View Obituary & Service Information

The family of Charles Walter Lewis created this Life Tributes page to make it easy to share your memories.

Send flowers to the Lewis family.