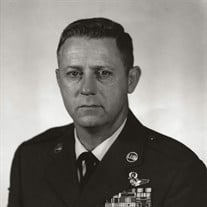 Charlie Lynch, age 92, of Erwin, passed away on Monday, January 3, 2022, at Unicoi County Hospital. A native of Erwin, Charlie is a son of the late John Henry and Maxie (Candler) Lynch. He was a proud veteran of the United States Army during the Korean War, where he served as a Radio Operator. He then joined the United States Air Force where he served as a Boom Operator during the Vietnam War. He retired from the military in 1974. Charlie also retired as an affiliate Real Estate Broker and his most recent retirement was as an officer with the Erwin Police Department. He was a member of the Shriners and served as the Exalted Ruler of Elks Lodge # 1985 for multiple terms. He enjoyed Texas Hold 'em and playing in Poker Tournaments. Charlie loved playing golf and was an avid outdoorsmen. In addition to his parents, he is preceded in death by one daughter, Pamela Dawn Lynch and one granddaughter, Charity Marlowe. Charlie Lynch has left behind to cherish his memory: wife: Dorothy Lynch; children: Charles Douglas "Doug" Lynch, II, John David Lynch and wife, Diane, and Melinda "Mendy" Lynch-Aderhold and husband, Jim "Jimbo" Aderhold; grandchildren: Keenan David Lynch and wife, Maggie, Kelly Dee Lynch, Kara Dawn Dublin and husband, Mike, and Nicholas Charles Lynch and special friend, Hannah Peterson; great-grandchildren: Nolan Phillip Lynch and Helena Danae Lynch; Special friend: Will Mominee. The family would like to offer special thanks to Rebecca Thompson, Nurse Manager at Unicoi County Hospital and to Dr. Daniel Tolan for their care during this difficult time. A committal service with military honors will be held at a later date. Honorary pallbearers will be Will Mominee, Carl Jones, and David Shultz, Sr. In lieu of flowers, memorial donations can be made in Charlie's name to Shriners Hospitals for Children, Attn: Office of Development, 2900 Rocky Point Drive, Tampa, FL 33607 or to Erwin Elks Lodge # 1985, 401 Elks Club Road, Erwin, TN 37650. Condolences and memories may be shared with the family and viewed at www.valleyfuneralhome.net or on Facebook at https://www.facebook.com/ValleyFuneralHomeErwin . These arrangements are made especially for the family and friends of Charlie Lynch through Valley Funeral Home, 1085 N. Main Ave., Erwin, 423-743-9187.

Charlie Lynch, age 92, of Erwin, passed away on Monday, January 3, 2022, at Unicoi County Hospital. A native of Erwin, Charlie is a son of the late John Henry and Maxie (Candler) Lynch. He was a proud veteran of the United States Army during... View Obituary & Service Information

The family of Charlie Lynch created this Life Tributes page to make it easy to share your memories.

Charlie Lynch, age 92, of Erwin, passed away on Monday, January...

Send flowers to the Lynch family.