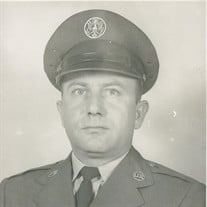 Clay Rogers, age 87, of Erwin, went home to be with the Lord on Friday, December 8, 2017 at the Johnson City Medical Center. A native of Erwin, he is a son of the late Joe and Stella (Francis) Rogers. Clay attended both Embreeville Church of Christ and Lilly Dale Church of Christ. He retired as a 21 ½ year veteran of the United States Air Force where he served in the Korean War and received many medals. He was employed by Nuclear Fuel Services as a Lab Tech. He was the Fire Chief on Moron Air Force Base in Spain and was with the Embreeville Fire Department for over 30 years, where he served as the Secretary and Treasurer. Clay was a Youth Director and member of the Church of Christ in Bossier City, LA. He was the State Representative for the Boy Scouts in Louisiana, and a member of the Elks Lodge, York Rite and Scottish Rite with the Jericho Shriners in Kingsport, TN and a Mason. Clay was a son of lovely Christian parents and he loved God, family and his country. He enjoyed working in his camp ground and loved Shriner's outreach and working with the fire department. In addition to his parents, Clay is preceded in death by: sisters, Fay Rogers Phillips and Betty Rogers Coffey, as well as by seven infant brothers and sisters. Clay Rogers has left behind to cherish his memory: Wife of 65 years: Dorothy (Cox) Rogers; Sister: Judy Burleson and husband Bill, of Erwin; Sister-in-law: Margaret Halas and husband Donald, of Baltimore, MD; Brother-in-law: Marvin Kegley and wife Dorris, of Erwin; Sister-in-law: Darlene Lewis and husband Gary, of Fall Branch; Several nieces and nephews; Very many friends. The family would like to offer special thanks to Rescue 8, Unicoi County Memorial Hospital Emergency Room staff, Unicoi County Memorial Hospital Nursing staff, Johnson City Medical Center ICU 2900 staff, Dr. James Dykes, Dr. James Goss and the staff of Roller Pharmacy for all of their kindness and support. The family respectfully requests the honor of your presence as we offer tribute and remember the life of Clay Rogers in a committal service, with military honors, to be held at 2:30 PM on Tuesday, December 12, 2017 at Mountain Home National Cemetery. Pastor Scotty Phillips and Pastor Jeremy Green will officiate. Musical selections will be provided by Howard Ensor. Those attending the committal service will meet at Valley Funeral Home by 1:15 PM on Tuesday to go in procession. Active pallbearers will be the United States Air Force. Honorary pallbearers will be the Jericho Shriners, Legion of Honor, Embreeville Volunteer Fire Department, the Fireman's Association and members of the Elks Club. In lieu of flowers, memorial donations can be made to Shriner's Hospital for Children, 950 West Faris Road, Greenville, SC 29605 Condolences and memories may be shared with the family and viewed at www.valleyfuneralhome.net or on Facebook at https://www.facebook.com/ValleyFuneralHomeErwin. These arrangements are made especially for the family and friends of Clay Rogers through Valley Funeral Home, 1085 N. Main Ave., Erwin, 423-743-9187.

Clay Rogers, age 87, of Erwin, went home to be with the Lord on Friday, December 8, 2017 at the Johnson City Medical Center. A native of Erwin, he is a son of the late Joe and Stella (Francis) Rogers. Clay attended both Embreeville Church... View Obituary & Service Information

The family of Clay E. Rogers created this Life Tributes page to make it easy to share your memories.

Send flowers to the Rogers family.