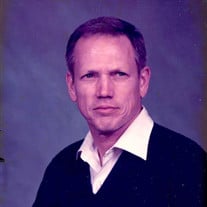 Lieutenant Colonel (Retired) George Edward Jackson, Jr. went home to be with the Lord on July 14, 2018, at the age of 84. He was a member of Centenary Methodist Church and attended Trinity Free Will Baptist Church. He is preceded in death by his parents, George and Lucille Jackson, and nephew, Chris Bolton. He is survived by his wife, Ruth, and sons: Michael Jackson (Kristy), David Jackson (Wendy), Reed Jackson, and daughter, Mallory Jackson. Stepchildren: Leonard Parsons (Andrea), Brooke Parsons Carter (Keith), Tyler Parsons, Drew Parsons (Tracy). Grandchildren: Bronwyn Jackson, Samantha and Thomas Jackson. Stepgrandchildren: Leandra, Molly, Landon (Jake), and Lillian Parsons. Sisters: Sara Liller (Charlie) and Deborah Bolton (Jim). Nieces: Tammy Goetluck, Sara Fann, and Rebecca Gallman. He had a special friend, Fain Bennett, and a fondness for a special dog, Sport. A native of Tampa, George attended Hillsborough High School, University of Florida, University of Tampa, and East Tennessee State University. He earned a B.S. in Psychology and Masters in History. He had a military career spanning almost 30 years, starting with 2 years in the Navy. He began in the army as a Warrant Office One, was a Military Intelligence Officer, and retired as a Lieutenant Colonel. He served in the Vietnam War, mainly flying Caribou as an Army Aviator. After military retirement, he started his own company, East Tennessee Community Corrections, working with parolees. His military awards and decorations include: Army Aviator Badge, National Defense Service Medal (1st Oak Leaf Cluster), Vietnam Service Medal, Air Medal (7th Oak Leaf Cluster), Good Conduct Medal, Republic of Vietnam Campaign Medal, Expert (Rifle-M16A1), Vietnam Cross of Gallantry, Meritorious Unit Citation, Meritorious Service Medal, and Armed Forces Reserve Medal. From 2000 to the present, George was a member of the Civil Air Patrol (CAP). He was asked to be the Squadron Commander of the declining Greeneville unit, which successfully revived under his leadership. He was involved in Boy Scouts for many years and became an Eagle Scout, along with 3 sons and 2 stepsons. He was a member of the NRA. George enjoyed fishing, hunting, camping, boating, skiing, and his cabin. He traveled the world, but his favorite was the mountains in East Tennessee. He took up running road races and earned many trophies. Growing up on a lake, he was an excellent swimmer and lifeguard. As a professional water skier George set a world's record by skiing 2000 miles down the Mississippi River on Sept 4, 1960. But most of all, he loved airplanes. Recently, he had designed plans to build his own. George was a tough soldier with a tender heart. He believed in being honest, no matter what. He was more than willing to help others in need, such as stopping along the road for help with car trouble or deliver Thanksgiving meals. He loved his family and prayed to see them all in heaven. Pallbearers will be Patrick Bridges (honorary Jordan Bridges), Royce Clouse, Brett Jones, Scott Jones, Kelvin Kuylee, Bill Smith, Marty Smith, and Tommy Tate. In lieu of flowers, the family requests donations be made to Civil Air Patrol, Greeneville Composite Squadron, 355 Goddard Drive, Greeneville, TN 37745 or to St. Jude Children's Research Hospital. The family respectfully requests the honor of your presence as we offer tribute and remember the life of Lieutenant Colonel (Retired) George Edward Jackson, Jr. in a committal service to be held at 2:30 p.m. on Friday, July 20, 2018 in Mountain Home National Cemetery, 53 Memorial Avenue, Mountain Home, TN. Those who wish to attend will meet at Mountain Home National Cemetery by 2:20 p.m. A memorial service will be held at 6:00 p.m. on Friday, July 20, 2018 at Trinity Free Will Baptist Church, 1121 N. Main Avenue, Erwin, TN. A visitation period to share memories and offer support to the family will be held from 7:00 p.m. until 8:00 p.m. at Trinity Free Will Baptist Church. Condolences and memories may be shared with the family and viewed at www.valleyfuneralhome.net or on Facebook at https://www.facebook.com/ValleyFuneralHomeErwin. These arrangements are made especially for the family and friends of Lieutenant Colonel (Retired) George Edward Jackson, Jr. through Valley Funeral Home, 1085 N. Main Ave., Erwin, 423-743-9187.

Lieutenant Colonel (Retired) George Edward Jackson, Jr. went home to be with the Lord on July 14, 2018, at the age of 84. He was a member of Centenary Methodist Church and attended Trinity Free Will Baptist Church. He is preceded in death by... View Obituary & Service Information

The family of George Edward Jackson Jr. created this Life Tributes page to make it easy to share your memories.

Send flowers to the Jackson family.