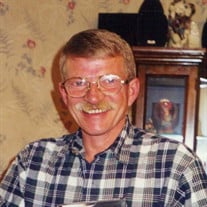 Harley Gerald Stancil, age 65, of Erwin, passed away on Monday, February 18, 2019, at his home. A native of Erwin, Harley is a son of the late Hoyle and Juanita (Ayers) Stancil. Formerly, he attended Trinity Free Will Baptist Church. Harley worked with the Unicoi County Rescue Squad where he was trained on the Jaws of Life and in 1995 was named "Squadsman of the Year". Later, he worked at Hoover Ball and then for Unicoi County Gas Utility District, where he was a CP Tech until he retired. He loved racing. In addition to his parents, Harley is preceded in death by his wife: Cathy Anita (Honeycutt) Stancil; Daughter: Brandy Elizabeth Stancil Broyles; Twin Brother: Robert "Bob" Stancil; Sister: Cathy Jo Stancil Vance; Nephew: Jason Stancil; Father-in-law: Albert Honeycutt; Mother-in-law: Mildred Honeycutt; Maternal Grandfather and Grandmother: Sol and Ida Le Day Ayers. Harley Gerald Stancil leaves behind to cherish his memory: Son: Robert "Chad" Stancil and wife, Tanya; Grandsons: Robbie Stancil, Luke Stancil; Brothers: Kenneth Stancil and wife, Kathy, of Townsend, Montana, Gene Pat Stancil, of Erwin; Nieces: Nicole Godsey, Jessica Correa, Elysia Hooker, Jolene Stancil Morice, Tawyna Stancil Johnston, Nephew: Kenny Stancil; Many beloved cousins. The family respectfully requests the honor of your presence as we offer tribute and remember the life of Harley Gerald Stancil in a funeral service to be held at 7:00 PM on Friday, February 22, 2019 in the chapel at Valley Funeral Home. Pastor Charlie Byrd and Minister Jeff Winters will officiate. A visitation period to share memories and offer support to the family will begin at 5:00 PM on Friday and will continue until service time at Valley Funeral Home. A private entombment will be conducted in the mausoleum at Evergreen Cemetery at a later date. Condolences and memories may be shared with the family and viewed at www.valleyfuneralhome.net or on our Facebook page at www.facebook.com/ValleyFuneralHomeErwin. These arrangements are made especially for the family and friends of Harley Gerald Stancil through Valley Funeral Home, 1085 N. Main Ave., Erwin, 423-743-9187.

Harley Gerald Stancil, age 65, of Erwin, passed away on Monday, February 18, 2019, at his home. A native of Erwin, Harley is a son of the late Hoyle and Juanita (Ayers) Stancil. Formerly, he attended Trinity Free Will Baptist Church. Harley... View Obituary & Service Information

The family of Harley Gerald Stancil created this Life Tributes page to make it easy to share your memories.

Harley Gerald Stancil, age 65, of Erwin, passed away on Monday,...

Send flowers to the Stancil family.