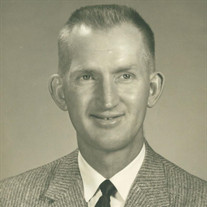 Henry A. Clouse, age 95, of Erwin, passed away on Wednesday, April 25, 2018 at the Center on Aging and Health. Mr. Clouse was born August 27, 1922 in Washington County but has lived most of his life in Unicoi County. He is the son of the late Walter and Sue Emma Hensley Clouse. Henry was an educator, spent his life teaching and as a school administer. He taught at Flag Pond, Temple Hill, Love Chapel, and was the Superintendent of Schools. Mr. Clouse graduated from Unicoi County High School in 1942 and shortly after was drafted into the United States Army during World War II. Henry spent time overseas in Europe and was wounded in Germany. Mr. Clouse then returned and started school at East Tennessee State University where he received his Bachelor of Science Degree and was certified to teach elementary and high school. Later he went to Nashville to attend George Peabody College, a division of Vanderbilt University, where he received his Master's Degree. In 1952 Henry married the love of his life, Arlene Pate Clouse, and later had one son. He is a member of Shallow Ford Baptist Church. Henry enjoyed gardening for many years and providing fresh vegetables for his family and friends. In addition to his parents, Mr. Clouse is preceded in death by his loving wife Arlene Pate Clouse, brothers Guy Clouse, Leonard Clouse, Harold Clouse, and Edward Clouse. Henry A. Clouse has left behind to cherish his memory: Son: Tommy A. Clouse and wife, Carolyn of Flag Pond; Step Grandchildren: Heather Bailey and husband, Corey of Hampton, Kelly Peterson and husband, Michael of Erwin, Jordan Vance of Flag Pond and girlfriend, Lindsay Hyder of Elizabethton; Step Great Grandchildren: Rilee Peterson, Connor Peterson; Several Nieces and Nephews. The family respectfully requests the honor of your presence as we offer tribute and remember the life of Henry A. Clouse in a funeral service to begin at 2:00 PM on Saturday, April 28, 2018 in the Chapel of Valley Funeral Home. Mr. John English will provide an Eulogy and Rev. Zach Smith. Vocal selections will be provided by Gary Amos. A visitation period to share memories and offer support to the family will begin at 12:00 PM and will continue until service time on Saturday at Valley Funeral Home. A graveside committal service will follow at Roselawn Memory Gardens. Those service as active pallbearers will be John English, Chris Bogart, Ben Evely, Michael Smith, Jordan Vance, and Michael Peterson, II. Honorary pallbearer will be Corey Bailey. Condolences and memories may be shared with the family and viewed at www.valleyfuneralhome.net or on Facebook at https://www.facebook.com/ValleyFuneralHomeErwin. These arrangements are made especially for the family and friends of Henry A. Clouse through Valley Funeral Home, 1085 N. Main Ave., Erwin, 423-743-9187.

Henry A. Clouse, age 95, of Erwin, passed away on Wednesday, April 25, 2018 at the Center on Aging and Health. Mr. Clouse was born August 27, 1922 in Washington County but has lived most of his life in Unicoi County. He is the son of the late... View Obituary & Service Information

The family of Henry A. Clouse created this Life Tributes page to make it easy to share your memories.

Send flowers to the Clouse family.