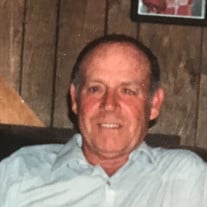 Howard Elmer "Earl Lee" Cantrell, age 87, of Johnson City, went home to be with his Heavenly Father on Tuesday, February 9, 2021, after a brief illness. Earl Lee was born on January 25, 1934, in Flag Pond, TN to parents, James and Media (Metcalf) Cantrell. He was of the Baptist faith. Earl Lee was lovingly known and beloved by many. He didn't know a stranger. He proudly served 4 years in the United States Army, in the Korean War Theater. After returning home to Tennessee, he married Rosella Rice and started a family. They had six children. Earl Lee had a green thumb and could grow just about anything. In 1990, he retired after 35 years of tobacco and tomato farming. He spent his retirement years enjoying life and making many friends in and around Washington County, TN. Some folks thought he should have been a comedian instead of a farmer. He always loved to make folks laugh. Earl Lee loved NASCAR and was a huge Darrell Waltrip and Jimmy Johnson fan! He absolutely loved country music and played the guitar. Jennifer Anniston was his very favorite actress. He loved his family, and especially loved spending time with his great-grandchildren, Coraline and Corben. In his own words, he said "I have lived a good life and I am ready to go home and be with my Lord". May you rest in peace, dad, in the arms of the Lord, until we meet again on Heaven's golden shores. In addition to his parents, Earl Lee is preceded in death by his brothers: Floyd Cantrell, Boyd Cantrell, Guy Lee Cantrell, JP Cantrell and Daniel Cantrell; sisters: Glenna Sue Cantrell Roland, Betty Cantrell Griffith, Chassie Cantrell Hurley, Pearl Cantrell Greer and Shirley Cantrell. Howard Elmer "Earl Lee" Cantrell has left behind to cherish his memory: First wife, of 33 years: Rosella Cantrell Shelton; Sons: Ricky Cantrell, Rodney Cantrell, both of Unicoi, TN; Daughters: Debbie Nielsen and husband, Glenn, Mellissa Szucs and husband, Csaba, both of Erwin, TN, Brenda Snodgrass and husband, Larry, Jackie Hughes and husband, Randy, both of Church Hill, TN; Sister: Mildred Cantrell Duncan, of Erwin, TN; Grandchildren: Tina Cantrell, of Charlotte, NC, Jessica Fisher and husband, Daniel, of Kingsport, TN, Nancy Guinn and husband, Aaron, of Charleston, SC, Nicole Clark and fiancé, Bobby Hilton, of Gray, TN, Dakota Shelton, of Flag Pond, TN, Holden Tolley, of Johnson City, TN, Chandera "Toody" Tolley and husband, Alexzander Bailey, of Eagle River, AK, Cassidy Waters, of Unicoi, TN; Step-grandchildren: Amber Head and husband, Lyle, of Greeneville, TN, Amanda Miller and husband, Billy, of Erwin, TN, Alisa Darter and husband, Mike, of Mt. Carmel, TN, Nicole Hughes, of Mt. Carmel, TN, Jesica Szucs Grindstaff and husband, Jason, of Johnson City, TN, Matthew Szucs, of Erwin, TN, Steven Szucs, of Erwin, TN; Great-grandchildren: Brazahn Austin, of Johnson City, TN, Brylee Austin and Jaydiss Smith, of Charlotte, NC, Isabell Fisher, of Kingsport, TN, Andrew Fisher, of Kingsport, TN, Sammy Fisher, of Kingsport, TN, Kennede Hilton, of Gray, TN, Coraline Waters, of Erwin, TN, Corben Waters, of Erwin, TN; Step-great-grandchildren: Landon and Bryson Head, Caleb and Leila Barnett, Brianna Darter, Jackson, Carson and Ainslee Guinn; A host of nieces and nephews here in the Tri-Cities and scattered throughout the United States. The family would like to offer special thanks to the wonderful staff at Center on Aging and Health in Erwin, TN, for the loving care administered to our father during his brief stay. Also, a special thank you to the staff of Amedisys Hospice and his nurse, Becky Bennett, for their wonderful support and care. The family respectfully requests the honor of your presence as we offer tribute and remember the life of Howard Elmer "Earl Lee" Cantrell in a Celebration of Life service to be held at 6:00 pm on Thursday, February 11, 2021 in the chapel at Valley Funeral Home. Reverend Craig Shelton will officiate. A visitation period to share memories and offer support to the family will begin at 4:00 pm on Thursday, February 11, 2021 and will continue until service time in the chapel at Valley Funeral Home. A graveside committal service will be held at 11:00 am on Friday, February 12, 2021 in Metcalf Cemetery, Flag Pond, TN. Those attending should meet at Valley Funeral Home by 10:30 am on Friday, February 12, 2021, to in procession to the cemetery. Serving as pallbearers will be: Ricky Cantrell, Rodney Cantrell, Dakota Shelton, Holden Tolley, Glenn Nielsen, Csaba Szucs, Steven Szucs, Matthew Szucs, Mackey Duncan and Christopher Duncan Due to the Covid-19 pandemic and in accordance with the Unicoi County Mask mandate, we respectfully request that anyone attending services please wear a mask or face covering at all times and observe all social distancing guidelines. Condolences and memories may be shared with the family and viewed at www.valleyfuneralhome.net or on Facebook at These arrangements are made especially for the family and friends of Howard Elmer "Earl Lee" Cantrell through Valley Funeral Home, 1085 N. Main Ave., Erwin, 423-743-9187 .

The family of Howard Elmer "Earl Lee" Cantrell created this Life Tributes page to make it easy to share your memories.

Send flowers to the Cantrell family.