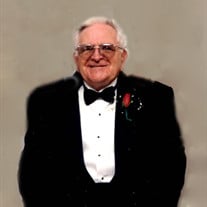 James "Jim" David LaFollette, age 87, of Erwin, passed away on Tuesday, August 7, 2018, at Johnson City Medical Center. A native of Johnson City, Jim is a son of the late Joseph and Lillian (Freeman) LaFollette. He was of the Christian faith and a member of Southside Freewill Baptist Church where he played the bass. He was also a former member of the Southside Quartet. Jim was a proud veteran of the United States Army having retired as a Sergeant First Class after more than 37 years of service as a Heavy Equipment Mechanic. He enjoyed motorcycles and working on diesels. He was a mechanic who could fix anything, especially transmissions. In addition to his parents, Jim is preceded in death by one sister, Louise Hughes. James "Jim" David LaFollette has left behind to cherish his memory: Wife of 62 years and love of his life: Eloise (Arwood) LaFollette, of Erwin; Daughters: Angela Henson, of Erwin, Pennie Keplinger and husband, Tony, of Erwin; Son: Neal LaFollette and wife, Teresa, of Erwin Sisters: Edna Fair, of Jonesborough, Katheryn Sawyer, of Erwin, JoAnn Stokes, of Limestone; Grandchildren: Toney LaFollette and wife, Renee, Christy Barr and husband, Joe, Amanda Honeycutt, Eric LaFollette and wife, Jessica, T. J. Keplinger and wife, Julie, April Cannon and husband, Matt, Thomas Keplinger and wife, Whitney, Lori LaFollette; Twenty great-grandchildren; Nine great-great grandchildren; Several nieces and nephews. The family respectfully requests the honor of your presence as we offer tribute and remember the life of James "Jim" David LaFollette in a funeral service to be held at 8:00 PM on Thursday, August 9 2018 in the chapel at Valley Funeral Home. Reverend Kevin Laws and Reverend Roger Laws will officiate. A visitation period to share memories and offer support to the family will begin at 6:00 PM on Thursday August 9, 2018 and will continue until service time in the chapel at Valley Funeral Home. A committal service will be held at 11:00 AM on Friday, August 10, 2018 in Evergreen Cemetery, with full military honors. Those wishing to attend the committal service will meet at Valley Funeral Home by 10:15 AM to go in procession. Serving as active pallbearers will be the United States Army. Honorary pallbearers will be Keith Stokes, Brandon Gouge, T.J. Keplinger, Thomas Keplinger, Chase Honeycutt, Dakota LaFollette, Eric LaFollette, Jackie Stokes and Jeff Stokes. Condolences and memories may be shared with the family and viewed at www.valleyfuneralhome.net or on Facebook at https://www.facebook.com/ValleyFuneralHomeErwin. These arrangements are made especially for the family and friends of James "Jim" David LaFollette through Valley Funeral Home, 1085 N. Main Ave., Erwin, 423-743-9187.

James "Jim" David LaFollette, age 87, of Erwin, passed away on Tuesday, August 7, 2018, at Johnson City Medical Center. A native of Johnson City, Jim is a son of the late Joseph and Lillian (Freeman) LaFollette. He was of the Christian faith... View Obituary & Service Information

The family of James "Jim" David LaFollette created this Life Tributes page to make it easy to share your memories.

James &quot;Jim&quot; David LaFollette, age 87, of Erwin, passed away on...

Send flowers to the LaFollette family.