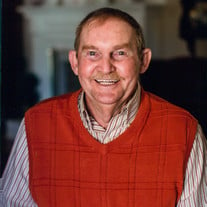 I have fought a good fight, I have finished my course, I have kept the faith. 2 Timothy 4:7 James "Harold" Rice, age 73, of Erwin, passed away on Monday, February 4, 2019, at James H. Quillen VA Medical Center, Mountain Home, TN. A native of Unicoi County, Harold is a son of the late Hestle and Jessie (McCurry) Rice. He was a member of Fishery Community Church, where he was on the Board of Trustees and was formerly a member of the administrative board. He was also the Sexton of Fishery Community Church Cemetery. He graduated from Unicoi County High School in 1965 where he was a member of the basketball team from 1961 - 1965. In 1965, he was selected to be on the "All State" basketball team. He was also on the baseball and football teams during his time at Unicoi County High School. Harold graduated from Tusculum College in 1987, having earned his Bachelor's Degree. He worked for the United States Postal Service and retired as the Post Master. Harold was a proud veteran of the United States Army, having served in Germany and then in the Vietnam War. He was an avid golfer and fisherman, a Mason, a Shriner and a member of the Elks Club. In addition to his parents, Harold is preceded in death by his father-in-law and mother-in-law: J. K. and Bertie Ambrose; adoptive parents: Willis and Alta Edwards; sister: Ruth Ann Rice; brother: Gerald Rice. James "Harold" Rice leaves behind to cherish his memory: Wife of 46 years: Margaret (Ambrose) Rice, of Erwin; Son: Jason Rice and fiancé, Jacey Lane, of Johnson City Sisters: Mary Lue Wollschlager and husband, Arthur, of Seaford, DE, Glenda Peterson, of Erwin, Debbie Randolph and husband, Ronnie, of Erwin; Brothers: Robert Rice, of Cumberland, MD, Johnny Rice and wife, Brenda, of Johnson City, David Rice and wife, Rita, of Erwin, Ricky Rice, of Erwin; Adoptive Sisters: Catherine Edwards Bunton and husband, Scotty, of Elizabethton, Ellen Van Dyke and husband, Thomas, of Damascus, VA, Julie Vanover and husband, Vic, of Concord, NC. The family would like to offer special thanks to the VA Medical Center staff and to Dr. Tamarro Taylor, MD, for their loving care during this difficult time. The family respectfully requests the honor of your presence as we offer tribute and remember the life of James "Harold" Rice in a funeral to be held at 7:00 PM on Thursday, February 7, 2019 in the chapel at Valley Funeral Home. Pastor Arthur Gibson will officiate. Musical Selections will be provided by Gil Moody, Kay Norris (pianist) and Larry Pate. A visitation period to share memories and offer support to the family will begin at 5:00 PM on Thursday, February 7, 2019 and will continue until service time in the chapel at Valley Funeral Home. A committal service will be held in Fishery Community Church Cemetery on Friday, February 8, 2019 at 11:00 AM. Those attending will meet at Valley Funeral Home by 10:30 AM on Friday to go in procession. Serving as active pallbearers will be Audie Peterson, Jr., Arthur Wollschlager, Michael Rice, Michael Allen, Larry Norris and Ryan Rice. Honorary pallbearers will be Michele Taylor and Rusty Wishon. In lieu of flowers, it would be Harold's wish that memorial donations be made to Fishery Community Church, Cemetery Fund, 501 Fishery Church Road, Erwin, TN 37650 Condolences and memories may be shared with the family and viewed at www.valleyfuneralhome.net or on our Facebook page at www.facebook.com/ValleyFuneralHomeErwin. These arrangements are made especially for the family and friends of James "Harold" Rice through Valley Funeral Home, 1085 N. Main Ave., Erwin, 423-743-9187.

I have fought a good fight, I have finished my course, I have kept the faith. 2 Timothy 4:7 James "Harold" Rice, age 73, of Erwin, passed away on Monday, February 4, 2019, at James H. Quillen VA Medical Center, Mountain Home, TN. A native... View Obituary & Service Information

The family of James 'Harold" Rice created this Life Tributes page to make it easy to share your memories.

I have fought a good fight, I have finished my course, I have...