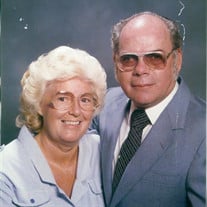 Noah Francis, age 88, of Erwin, passed away on Tuesday, March 2, 2021, at his home. His wife, Jean Martin Francis, age 88, of Erwin, passed away on Monday, March 8, 2021 at Franklin Woods Community Hospital. Mr. Francis is a son of the late Noah Francis, Sr. and the late Allene Pratt Francis Greer. Mrs. Francis is a daughter of the late Luther and Lora Foster Martin. Noah and Jean were married on July 3, 1952. They lived most of their life in Columbia, SC and were members of Cayce Nazarene Church in Cayce, SC. Noah was drafted into the United States Army in 1953 and served until 1959, during the Korean Conflict. He was employed by Burlington Mills, by Cummins Diesel for 17 years, worked with the co-owners of Cherokee Kenworth Trucks for 10 years, and V.B. Hook Produce for two years. Mr. Francis, along with two others, formed Carolina Trucks and Equipment, a Volvo Heavy Truck Dealership in Columbia and Charleston, SC. Jean worked at Argus Camera, Shakespeare, and K-Mart. They moved back to Erwin in 2002, after retiring. Noah also holds the NHRA Record for the fastest Dragster during the 50’s and 60’s. He loved working on automobiles, tractors and working his farm. Jean loved making birthday cakes for Noah’s employees and cooking big meals for her family. In addition to their parents, Noah and Jean are preceded in death by their daughter, Deborah Lynn Francis Flood, in 2007; Noah’s brother, Tom Francis; Jean’s brother, Clarence Martin; Noah’s sisters, Lamira Slagle and Elizabeth Royston; and Jean’s sisters: Dorothy Phillips, Wilma Laws and Adell Calloway and Jean’s brother: Hubert Martin. Noah and Jean Francis leave behind to cherish their memories: Grandsons: Howard Flood, Barry Flood; Granddaughter-in-law: Gina Flood; Great-grandchildren: Madison, Greyson, Olivia, Lyla, Noah and Charlotte; Jean’s sisters: Joyce Erwin, Reba Barnett; Noah’s brother: Orlis Francis. The family respectfully requests the honor of your presence as we offer tribute and remember the lives of Noah and Jean Martin Francis in a graveside committal service with Military Honors to be held at 1:00 pm on Friday, March 12, 2021 in Mountain Home National Cemetery. Those attending should meet at the cemetery by 12:50 pm for the service. In lieu of flowers, please make memorial donations to the Church of the Nazarene, 2201 Taylor Road, Cayce, SC, 29033. The family would like to offer special thanks to Rachel Hendricks, Mr. & Mrs. Francis’ great-niece, for the loving care she has provided over the past 10 years. Due to the COVID-19 pandemic we ask that anyone attending services wear a mask or face covering at all times and observe all social distancing guidelines. Condolences and memories may be shared with the family and viewed at www.valleyfuneralhome.net or on our Facebook page at www.facebook.com/ValleyFuneralHomeErwin. These arrangements are made especially for the family and friends of Noah and Jean Martin Francis through Valley Funeral Home, 1085 N. Main Ave., Erwin, 423-743-9187.

The family of Jean & Noah Francis created this Life Tributes page to make it easy to share your memories.

Noah Francis, age 88, of Erwin, passed away on Tuesday, March...

Send flowers to the Francis family.