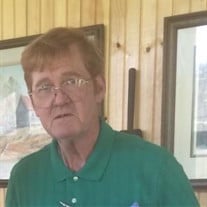 John Keesecker, age 77, of Erwin, passed away on Wednesday, January 19, 2022, at his home. A native of Erwin, John is a son of the late P.M. and Pauline (Brummitt) Keesecker. He was a member of First Baptist Church, where he served as a Deacon. John's career in Education led him through the Unicoi County School system, as a Teacher, Superintendent of Schools, and finally to the State Department of Education where he served Regional Title 1 Coordinator. He retired in 2009, completing 38 years of service. He was an avid sports fan who loved officiating football and basketball through the years. In addition to his parents, John is preceded in death by two sons: John Mark Keesecker on March 17, 2007 and Matthew Lewis Keesecker on October 26, 2014; one grandson: Jordan Lucas Keesecker; seven brothers: Sammy Keesecker, A.G. Keesecker, Michael "Mickey" Keesecker, Conrad Keesecker, Steven Keesecker, Jerry Keesecker and Karl Keesecker; and two sisters: Nancy Bogart and Irene Gray. John Keesecker has left behind to cherish his memory: wife of 58 years: Rexanna "Ann" (Lewis) Keesecker; granddaughter: Bethany Faye Keesecker Steel and husband, Jayson; grandson: Ryan Matthew Keesecker and wife, Destany; great-grandson: Jordan Keesecker; sister: Katrinka K. Quillen; and numerous nieces and nephews. The family respectfully requests the honor of your presence as we offer tribute and remember the life of John Keesecker in a committal service to be held at 2:00 pm on Saturday, January 22, 2022 in Evergreen Cemetery. Dr. Koby Strawser will officiate. Those attending the committal service should meet at Evergreen Cemetery by 1:50 pm on Saturday for the service. Serving as active pallbearers will be Alan Keesecker, Gary Keesecker, Jason Keesecker, Nathan Keesecker, Kurt Keesecker, Mark Douglas Keesecker and Chris Bogart. Honorary pallbearers will be Jeff Blake, Jim Hughes, John Rambo, Terry Orth, Kelly Wolfe, Rob Stromberg and David Lane. In lieu of flowers, memorial donations can be made in John's name to: First Baptist Church, 200 Love Street, Erwin, TN 37650. Condolences and memories may be shared with the family and viewed at www.valleyfuneralhome.net or on our Facebook page at www.facebook.com/ValleyFuneralHomeErwin. These arrangements are made especially for the family and friends of John Keesecker through Valley Funeral Home, 1085 N. Main Ave., Erwin, 423-743-9187.

John Keesecker, age 77, of Erwin, passed away on Wednesday, January 19, 2022, at his home. A native of Erwin, John is a son of the late P.M. and Pauline (Brummitt) Keesecker. He was a member of First Baptist Church, where he served as a Deacon.... View Obituary & Service Information

The family of John Keesecker created this Life Tributes page to make it easy to share your memories.

John Keesecker, age 77, of Erwin, passed away on Wednesday, January...

Send flowers to the Keesecker family.