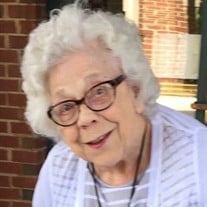 Juanita Gilbert, age 94, of Erwin passed away on Wednesday, February 6, 2019 at The Waters of Johnson City. A native of Ramseytown, NC, Juanita is a daughter of the late Bryan and Cora Bell (Adkins) Higgins. She was a member of Lily Dale Church of Christ, where she taught Sunday School, sang in the choir and was active in Joy Circle. In Juanita's early years living in Erwin, she was employed as an artist at Southern Pottery and later as an inspector at Industrial Garment. She loved her grandchildren and enjoyed reading, sewing, puzzles, word searches and shopping. In addition to her parents, Juanita is preceded in death by her husband, R. C. Gilbert; six sisters: Evelyn Miller, Grace Lewis, Katherine Gilbert, Nell McMahan, Margaret Bailey and Martha Higgins; and grandson: Ralph Tipton, Jr. Juanita Gilbert leaves behind to cherish her memory: Daughters: Peggy McCurry, of Johnson City, Janice Gilbert, of Johnson City; Grandchildren: Tim McCurry and wife, Vicki, of Unicoi, Julie Hyder and husband, Hobie, of Johnson City, Lori Colinger and husband, Jason, of Johnson City, Kelly Thompson and husband, Darren, of Johnson City; Great-grandchildren: Landon Colinger, Noah Colinger, Sophie Colinger, Rachel McCurry, Stephanie McCurry, Kinley Thompson, Daven Thompson, Kylee Thompson, Kaylyn Hyder; Several nieces and nephews. The family respectfully requests the honor of your presence as we offer tribute and remember the life of Juanita Gilbert in a committal service to be held at 2:00 PM, Sunday, February 10, 2019 in Roselawn Memory Gardens. Reverend Tim Broyles will officiate. Musical selections will be provided by Wendy Salyer and David Holtsclaw. Those attending will meet at Roselawn Memory Gardens by 1:50 PM for the service. Honorary pallbearers will be Tim McCurry, Hobie Hyder, Jason Colinger and Darren Thompson. Condolences and memories may be shared with the family and viewed at www.valleyfuneralhome.net or on Facebook at https://www.facebook.com/ValleyFuneralHomeErwin. These arrangements are made especially for the family and friends of Juanita Gilbert through Valley Funeral Home, 1085 N. Main Ave., Erwin, 423-743-9187.

Juanita Gilbert, age 94, of Erwin passed away on Wednesday, February 6, 2019 at The Waters of Johnson City. A native of Ramseytown, NC, Juanita is a daughter of the late Bryan and Cora Bell (Adkins) Higgins. She was a member of Lily Dale Church... View Obituary & Service Information

The family of Juanita Gilbert created this Life Tributes page to make it easy to share your memories.

Juanita Gilbert, age 94, of Erwin passed away on Wednesday, February...

Send flowers to the Gilbert family.