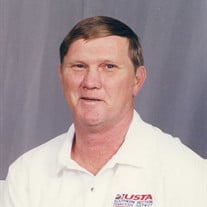 1 Thessalonians 4:16-17 For the Lord himself shall descend from Heaven with a shout, with the voice of the archangel, and with the trump of God: and the dead in Christ shall rise first: Then we which are alive and remain shall be caught up together with them in the clouds, to meet the Lord in the air: and so shall we ever be with the Lord. Karl Keesecker, age 68, of Erwin, passed away on Saturday, August 17, 2019 at Johnson City Medical Center. Karl is a son of the late P.M. and Pauline Keesecker. In addition to his parents, is preceded in death by six brothers: Sammy, A.G., Michael, Conrad, Steven and Jerry Keesecker; sisters: Nancy Bogart and Irene Gray; nephews: Jerome M. "Bubba" Gray, Randy, Mark and Matthew Keesecker; and sister-in-law: Penny Keesecker. He was also preceded in death by his beloved Chihuahua, Cleo, in 1999. Karl leaves behind to cherish his memory: loving wife: Teresa and daughter, Karla Keesecker, of Erwin; one sister: Katrinka Quillen and husband, Prezzle, of Kingsport; one brother: John Keesecker and wife, Ann, of Erwin; numerous nieces and nephews; brother-in-law: Howard Bogart, of Erwin; sisters-in-law: Margaret Lee Keesecker, of Newport News, VA, Anita Keesecker, of Grove City, OH and Carol Keesecker, of Erwin. Karl was a United States Army Veteran, having served in Germany during the early 1970's. He attended Mars Hill College and East Tennessee State University. Much of his life revolved around playing tennis, which he loved. He was a co-founder of the Mountain Empire Tennis Association (META) in the 1990's. Karl worked alongside family members Sam, Penny, Nancy and Steve for many years at Keesecker Appliance and Furniture Company. He was a Rural Mail Carrier and was always committed to being a good mail carrier to his postal customers on Route 3. One of his most prized possessions was his right hand drive Jeep Wrangler Sport. Karl was a member of Ninth Street Baptist Church in Erwin, TN. He valued his upbringing at Ninth Street. The family respectfully requests the honor of your presence as we offer tribute and remember the life of Karl Keesecker in a graveside committal service to be held at 2:00 pm on Saturday, August 24, 2019 in the mausoleum chapel at Evergreen Cemetery. Dr. Chris Bogart will officiate. Musical selections will be provided by Karla Keesecker. A visitation period to share memories and offer support to the family will be held from 6:00 pm until 7:00 pm on Friday, August 23, 2019 in the chapel at Valley Funeral Home. Honorary pallbearers will be Lester "Spud" Chaffin, Tom Hensley, Jr., Phillip Hensley, Bill Tom Britton, James Bowman and Rick Rogers. Condolences and memories may be shared with the family and viewed at www.valleyfuneralhome.net or on Facebook at https://www.facebook.com/ValleyFuneralHomeErwin. These arrangements are made especially for the family and friends of Karl Keesecker through Valley Funeral Home, 1085 N. Main Ave., Erwin, 423-743-9187.

1 Thessalonians 4:16-17 For the Lord himself shall descend from Heaven with a shout, with the voice of the archangel, and with the trump of God: and the dead in Christ shall rise first: Then we which are alive and remain shall be caught up together... View Obituary & Service Information

The family of Karl Keesecker created this Life Tributes page to make it easy to share your memories.

Send flowers to the Keesecker family.