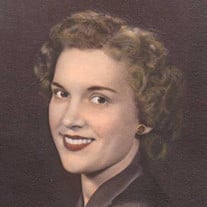 Kate Bailey Henderson, age 97, of Erwin, passed away on Friday, January 31, 2020 at Governor's Bend Retirement and Assisted Living following a brief illness. A native of Unicoi County, Kate lived in Mexico, Australia, New Zealand and Texas before returning to Erwin in 1994. Mrs. Henderson is a daughter of the late Charlie and Ethel Norris Bailey. She was a member of Love Chapel Christian Church and worked for Southern Pottery. In addition to her parents, Kate is preceded in death by her husband of 52 years, Frank P. Henderson, in 1999, six brothers, Elmer, C.L., Jr., Richard, Harry, Earl and Cecil Bailey, and three sisters, Pearl Ledford, Willie Clouse and Ruth Fain. Kate Bailey Henderson has left behind to cherish her memory: Sisters-in-law: Evangeline Bailey; Barbara Bailey; Several Nieces and Nephews, including special nephews, Harley Bailey, Frank Bailey, Charles Fain, and special niece, Jo Bogart; Step-Sons: Bob and David Henderson. The family would like to express their sincere thank you to Governor's Bend Assisted Living, Center on Aging, Amedisys, and especially Beth Ambrose and Colleen Cox, for the loving care given to Kate. At Mrs. Henderson's request there will be no visitation. A graveside committal service will be held on Monday, February 3, 2020 at 2:00 PM in Evergreen Cemetery. Amedisys chaplain will officiate. Those attending the committal service should meet at Evergreen Cemetery on Monday by 1:50 PM. Honorary pallbearers will be nephews, Harley Bailey, Frank Bailey, Richard Fain, Charles Fain and Toby Fain. In lieu of flowers the family would like memorial donations be made to the Unicoi County Animal Shelter or to the charity of your choice. Condolences and memories may be shared with the family and viewed at www.valleyfuneralhome.net or on Facebook at https://www.facebook.com/ValleyFuneralHomeErwin. These arrangements are made especially for the family and friends of Kate Bailey Henderson through Valley Funeral Home, 1085 N. Main Ave., Erwin, 423-743-9187.

The family of Kate Bailey Henderson created this Life Tributes page to make it easy to share your memories.

Kate Bailey Henderson, age 97, of Erwin, passed away on Friday,...

Send flowers to the Henderson family.