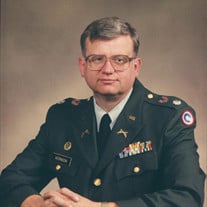 Lieutenant Colonel Edward Alexander Herndon, age 74, of Erwin, passed away unexpectedly on Thursday, June 18, 2020 at Johnson City Medical Center. A native of Welch, WV, Ed is a son of the late Ray H. and Mabel (Grubb) Herndon. He is a 1964 graduate of Gary High School in Gary, WV and earned a Bachelor's Degree when he graduated from Virginia Polytechnic Institute in 1968. Ed was a proud veteran of the United States Army. He was commissioned in July of 1969, served in the Vietnam Conflict and the Operation Desert Storm, and retired in 2006 with the rank of Lieutenant Colonel. Ed was a certified Law Enforcement Officer. He joined the Unicoi County Sheriff's Department in 1978 and served the county for more than 40 years. He served as Captain on the Unicoi County Sheriff's Department, currently served as the Unicoi County Civil Defense and Emergency Management Director. He was the local liaison for both Tennessee Emergency Management Agency (TEMA) and Federal Emergency Management Agency (FEMA). Ed was the longest serving Emergency Management Director in the state. He was appointed as Unicoi County Coroner upon Floyd Foster's death and still held that position. Ed served on the 911 Board was a member of the Emergency Management Board for all counties. In addition to his parents, Ed is preceded in death by his loving wife, Margo Herndon. Lieutenant Colonel Edward Alexander Herndon leaves behind to cherish his memory: Daughter: Angel Perhne and husband, Brian; Son: Joe Barr and wife, Christy; Grandchildren: Wyatt Sawyer, Emily Barr, Ella Barr; Sister: Ellen R. Herndon; Mother-in-law: Billie Tipton; Numerous friends, organizations and groups that Ed was involved with and loved as family. The family respectfully requests the honor of your presence as we offer tribute and remember the life of Lieutenant Colonel Edward Alexander Herndon in a funeral service to be held at 7:00 pm on Tuesday, June 23, 2020 at Calvary Baptist Church. Reverend David Crutchfield will officiate. Musical selections will be provided by Gary Amos. A visitation period to share memories and offer support to the family will begin at 3:00 pm and continue until service time on Tuesday, June 23, 2020. A graveside committal service will be held at 11:00 am on Wednesday, June 24, 2020 in Evergreen Cemetery. Full military honors will be provided by the United States Army and the Unicoi County Sheriff's Department Honor Guard. Those attending will meet at Valley Funeral Home by 10:15 am on Wednesday, June 24, 2020 to go in procession to the cemetery. Serving as pallbearers will be officers of the Unicoi County Sheriff's Department and the Erwin Police Department. In lieu of flowers, memorial donations can be made in Ed's name to the American Cancer Society, P.O. Box 22478, Oklahoma City, OK 73123 or to Calvary Baptist Church, 540 Adams Street, Erwin, TN 37650. Condolences and memories may be shared with the family and viewed at www.valleyfuneralhome.net or on Facebook at FuneralHomeErwin. These arrangements are made especially for the family and friends Lieutenant Colonel Edward Alexander Herndon through Valley Funeral Home, 1085 N. Main Ave., Erwin, 423-743-9187.

Lieutenant Colonel Edward Alexander Herndon, age 74, of Erwin, passed away unexpectedly on Thursday, June 18, 2020 at Johnson City Medical Center. A native of Welch, WV, Ed is a son of the late Ray H. and Mabel (Grubb) Herndon. He is a 1964... View Obituary & Service Information

The family of Lt. Col. Edward Alexander Herndon created this Life Tributes page to make it easy to share your memories.

Send flowers to the Herndon family.