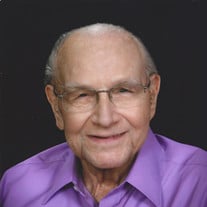 M.L. Phillips of Erwin, passed away on Wednesday, August 19, 2020 at Governor's Bend Assisted Living Facility. He was 94 years old, only 24 days from his 95th birthday. He was born in Yancey County, North Carolina and graduated from Bee Log High School in Burnsville. After high school, Mr. Phillips and his family moved to East Tennessee in Unicoi County. He was the son of the late Will and Millie (Adkins) Phillips. While attending business school he was drafted and served in the U.S. Army as a replacement soldier, landing on Omaha Beach during World War II. He was severely wounded in his first few days of battle and spent the next several months in hospitals in France and England. He received the Bronze Star and Purple Heart for his bravery. He was a member of the American Legion since 1946. Mr. Phillips was the proud owner and operator of Crystal Cleaners, Ice and Coal in Erwin for over 50 years. He was selected for inclusion in the 1996-1997 edition of Who's Who in Executives and Professionals. He was a devout Christian man. He was a member of Ninth Street Baptist Church. Even after he could no longer attend church, he continued his tithes, read his Bible twice a day and enjoyed watching Charles Stanley's, In Touch Ministry. One of his greatest passions was cars, specifically Fords. Over the years he restored many classics from a 1930 Model A to a 1965 UT orange Mustang. He shared his passion with the members of the Model A Restorers Club and was one of the founding members of the Autorama in Erwin. He loved driving his antique cars in parades every chance he had. In addition to his parents, M.L. is preceded in death by his wife, Margaret Virginia (Jones) Phillips; son, Michael Lynn Phillips; sister, Lena (Phillips) Jones; brothers, Bruce Phillips, Dewey Phillips and Dee Adkins. M.L. Phillips leaves behind to cherish his memory: Daughter-in-law: Debbie Vaden; Granddaughter: Jennifer Thayer; Great-grandchildren: Cambridge Thayer, Berkeley Thayer; Nephews: Tracy Jones, Terry Jones, Tim Shelton, Darrell Phillips, Nick Phillips, Terry Johnson. Nieces: Tracy Saylor, Cindy Bailey, Penny Smith; He was also an "adopted" Grandfather to: Brian Edwards, Josh Edwards. The family respectfully requests the honor of your presence as we offer tribute and remember the life of M.L. Phillips in a funeral service to be held at 7:00 pm on Thursday, August 27, 2020 in the chapel at Valley Funeral Home. Reverend Bernie Jones and Reverend Carl Connelly will officiate. Musical selections will be provided by Joey Lewis, Soloist and Becky Manfull. Mr. Phillips will lie in state from 6:00 pm until 7:00 pm on Thursday, August 27, 2020 in the chapel at Valley Funeral Home. A graveside service will be held on Friday, August 28, 2020 in Roselawn Memory Garden. Those attending will meet at Roselawn Memory Garden by 10:50 am for the service. In lieu of flowers, donations can be made in memory of M. L. Phillips to the TN Baptist Children's Home at 1310 Franklin Road, Brentwood, TN37027or the ETSU Foundation, Michael Phillips Memorial Scholarship Endowment, providing scholarships to Unicoi County High School students going to ETSU majoring in social work at PO Box 70721, Johnson City, TN 37614. Mr. Phillips' family would like to thank the many members of Governor's Bend and Amedisys Hospice. They provided a warm and loving environment and provided excellent care for his time there. Due to the COVID-19 pandemic and in accordance with Unicoi County's mask mandate, we respectfully request that you wear a face mask while attending services in the funeral home and observe social distancing guidelines during all services. Condolences and memories may be shared with the family and viewed at www.valleyfuneralhome.net or on our Facebook page at www.facebook.com/ValleyFuneralHomeErwin. These arrangements are made especially for the family and friends of M. L. Phillips through Valley Funeral Home, 1085 N. Main Ave., Erwin, 423-743-9187.

M.L. Phillips of Erwin, passed away on Wednesday, August 19, 2020 at Governor's Bend Assisted Living Facility. He was 94 years old, only 24 days from his 95th birthday. He was born in Yancey County, North Carolina and graduated from Bee Log... View Obituary & Service Information

The family of M.L. Phillips created this Life Tributes page to make it easy to share your memories.

Send flowers to the Phillips family.