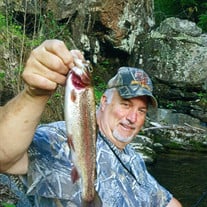 Michael Lloyd, age 67, of Erwin, passed away on Thursday, December 19, 2019 at The Waters of Johnson City. A native of Marshall, NC, Michael is a son of Hazel Jean (McIntosh) Lloyd and the late Reverend "H.P." Henderson Presley Lloyd. He was a proud veteran of the United States Army, having served during the Vietnam era. He also served in the Tennessee Army National Guard. Michael attended the Church of God and enjoyed hunting and fishing. He was employed by Hoover Ball for more than 20 years. He loved old muscle cars and attending Drag Races. In addition to his father, Michael is preceded in death by one brother. Danny Lloyd and grandparents: Carl McIntosh, Viola Ruthie McIntosh, McKinnley Lloyd and Mary "Cordellia" Lloyd. In addition to his mother, Michael Lloyd has left behind to cherish his memory: Wife of 45 years: Hazel Lee (Tipton) Lloyd, of Erwin; Son: Rodney Mitchell Price, of Cumming, GA, Michael Lee Lloyd and wife, Sandy, of Erwin; Brothers: Bill Lloyd and wife, Donna, Stephen "Pete" Lloyd and wife, Kim; Sister: Ruthie Zundel and husband, Troy; Numerous special friends; Several nieces and nephews. The family would like to offer special thanks to the staff of the VA Medical Center and Amedisys Hospice, as well as to Dr. Michelle Johnson. The family respectfully requests the honor of your presence as we offer tribute and remember the life of Michael Lloyd in a committal service to be held at 2:00 pm on Sunday, December 22, 2019 in the mausoleum chapel at Evergreen Cemetery. Reverend Craig Shelton will officiate. Musical selections will be provided by Lynn and Dana Tipton and family. A visitation period to share memories and offer support to the family will be held from 1:00 pm until 2:00 pm on Sunday, December 22, 2019 in the chapel at Valley Funeral Home. Those attending the committal service should meet at Valley Funeral Home by 1:45 pm on Sunday, December 22, 2019, to go in procession to the cemetery. Serving as active pallbearers will be Michael Lee Lloyd, Rodney Price, Josh Lloyd, Roger Tipton, Hobart Roberts and Gary "Bo" Tilson. Honorary pallbearers will be Norman Barnes, Ben Brackins, Eugene Brackins, Bruce Brackins and Stephen "Pete" Lloyd. In lieu of flowers, memorial donations can be made in Michael's name to the American Cancer Society, P.O. Box 22478, Oklahoma City, OK 73123. Condolences and memories may be shared with the family and viewed at www.valleyfuneralhome.net or on Facebook at https://www.facebook.com/ValleyFuneralHomeErwin. These arrangements are made especially for the family and friends of Michael Lloyd through Valley Funeral Home, 1085 N. Main Ave., Erwin, 423-743-9187.

Michael Lloyd, age 67, of Erwin, passed away on Thursday, December 19, 2019 at The Waters of Johnson City. A native of Marshall, NC, Michael is a son of Hazel Jean (McIntosh) Lloyd and the late Reverend "H.P." Henderson Presley Lloyd. He was... View Obituary & Service Information

The family of Michael Lloyd created this Life Tributes page to make it easy to share your memories.

Michael Lloyd, age 67, of Erwin, passed away on Thursday, December...

Send flowers to the Lloyd family.