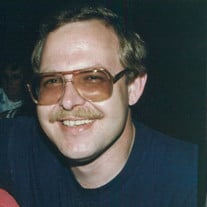 Michael H. Rice, age 60, of Erwin, passed away on Wednesday, October 30, 2019 at his home, surrounded by his loving family. A native of Erwin, Michael is a son of Pauline Rice and the late Eugene Rice and the loving husband of Gail (Hensley) Rice. He is a member of Erwin Church of God where he served as Trustee. Michael attended East Tennessee State University, where he obtained a Bachelor's Degree in Industrial Engineering. His love of learning strongly influenced his desire to take advanced courses to pursue his Master's Degree. Michael had a natural talent for seeing 3D potential which led him to work in Graphics and Design. He enjoyed woodworking and collected knives, airplanes, trains, and model aircraft carriers. He loved the outdoors, apple trees and beautiful architecture. He was a natural planner and designer. In addition to his father, Michael is preceded in death by his dear sister: Maria Ellen Rice; grandparents: Richard and Axie McIntosh and Parley and Edith Rice; uncles: Howard and Vonda Lee McIntosh and Garland and Eunice McIntosh; and his father-in-law: William Hensley. In addition to his mother, Michael H. Rice leaves behind to cherish his memory: Loving wife: Gail (Hensley) Rice, of Erwin; Twin brother: Marvin D. Rice and wife, Belinda; Brother: Alan Rice; Nieces: Hannah L. Rice, Chloe S. Rice; Nephew: David Alan Rice, who were the lights of his life; Brother-in-law: Toney Hensley and wife, Cindy; Mother-in-Law: Elsie Hensley; Special Aunts: Martha Ellen Ricker, Mary Sue Mashburn, Brenda Bennett; Several aunts and uncles; Numerous cousins. The family respectfully requests the honor of your presence as we offer tribute and remember the life of Michael H. Rice in a funeral service to be held at 7:00 pm Friday, November 1, 2019, in the chapel of Valley Funeral Home. Bishop John Edwards will officiate. Musical selections will be provided by Larry Pate. A visitation period to share memories and offer support to the family will begin at 5:00 pm and will continue until the hour of service on Friday at Valley Funeral Home. A graveside committal service will be held at 11:00 am on Saturday, November 2, 2019, in the mausoleum chapel at Evergreen Cemetery. Those attending will meet at Valley Funeral Home by 10:30 am on Saturday to go in procession to the cemetery. Serving as active pallbearers will be Gary Ollis, Michael Harris, Kevin Mashburn, Bruce Mashburn, Alan Rice and Marvin Rice. Honorary pallbearers will be Robert Correveau, Ivan Rice, A.D. McIntosh and Toney Hensley. In lieu of flowers, memorial donations can be made in Michael's name to: Erwin Church of God; Building Fund, 772 Rock Creek Road, Erwin, TN 37650. Condolences and memories may be shared with the family and viewed at www.valleyfuneralhome.net or on our Facebook page at www.facebook.com/ValleyFuneralHomeErwin. These arrangements are made especially for the family and friends of Michael H. Rice through Valley Funeral Home, 1085 N. Main Ave., Erwin, 423-743-9187.

Michael H. Rice, age 60, of Erwin, passed away on Wednesday, October 30, 2019 at his home, surrounded by his loving family. A native of Erwin, Michael is a son of Pauline Rice and the late Eugene Rice and the loving husband of Gail (Hensley)... View Obituary & Service Information

The family of Michael H. Rice created this Life Tributes page to make it easy to share your memories.