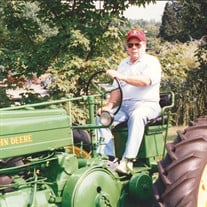 Noah Francis, age 88, of Erwin, passed away on Tuesday, March 2, 2021, at his home. Mr. Francis was born on August 16, 1932, in Jonesborough, TN, to the late Noah Francis, Sr. and the late Allene Pratt Francis Greer. Noah graduated from Jonesborough High School and married Jean Martin Francis on July 3, 1952. He was drafted into the United States Army in 1953 and served until 1959, during the Korean Conflict. He was employed by Burlington Mills, by Cummins Diesel for 17 years, worked with the co-owners of Cherokee Kenworth Trucks for 10 years, and V.B. Hook Produce for two years. Mr. Francis, along with two others, formed Carolina Trucks and Equipment, a Volvo Heavy Truck Dealership in Columbia and Charleston, SC. While in Columbia, SC he attended the Church of the Nazarene where he was well regarded as a professional and community leader. After his retirement, he moved back to Erwin in 2002. Noah also holds the NHRA Record for the fastest Dragster during the 50's and 60's. He loved working on automobiles, tractors and working his farm. In addition to his parents, Noah Francis is preceded in death by his daughter, Deborah Lynn Francis Flood in 2007, one brother, Tom Francis, and sisters, Lamira Slagle and Elizabeth Royston. Noah Francis leaves behind to cherish his memory: Loving wife of 68 years: Jean Martin Francis, Grandsons: Howard Flood; Barry Flood, Great Grandchildren: Madison, Grayson and Olivia Flood; Brother: Orlis Francis. The family respectfully requests the honor of your presence as we offer tribute and remember the life of Noah Francis in a graveside committal service with Military Honors to be held at 1:00 pm on Friday, March 12, 2021 in Mountain Home National Cemetery. Those attending should meet at the cemetery by 12:50 pm for the service. In lieu of flowers, please make memorial donations to the Church of the Nazarene, 2201 Taylor Road, Cayce, SC, 29033. Due to the Covid-19 pandemic, we respectfully request that anyone attending services please wear a mask or face covering at all times and observe all social distancing guidelines. Condolences and memories may be shared with the family and viewed at www.valleyfuneralhome.net or on Facebook at These arrangements are made especially for the family and friends of Noah Francis through Valley Funeral Home, 1085 N. Main Ave., Erwin, 423-743-9187 .

Noah Francis, age 88, of Erwin, passed away on Tuesday, March 2, 2021, at his home. Mr. Francis was born on August 16, 1932, in Jonesborough, TN, to the late Noah Francis, Sr. and the late Allene Pratt Francis Greer. Noah graduated from Jonesborough... View Obituary & Service Information

The family of Noah Francis created this Life Tributes page to make it easy to share your memories.

Noah Francis, age 88, of Erwin, passed away on Tuesday, March...

Send flowers to the Francis family.