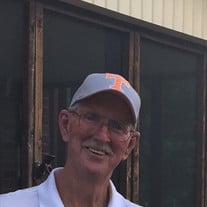 Robert Edward "Bob" Grimes, age 72, of Erwin, passed away on Wednesday, September 23, 2020 at Johnson City Medical Center. A native of Unicoi County, Bob was the son of the late William and Lola Grimes. He retired from Nuclear Fuel Services and then went on to become the Lay Pastor of Oakland Presbyterian Church. Bob was a devout Christian and showed the love of Jesus to everyone he met. When he was not with his church or his family, you could find Bob on the golf course practicing his golf swing. In addition to his parents, Bob is preceded in death by Raymond and Dorothy Grimes, Eddie and Norma Melanson, Forest and Dorothy Jean Hamilton, Jack Grymes and sister-in-law, Trudy Grimes. Robert Edward "Bob" Grimes leaves behind to cherish his memory: Wife of 51 years: Mae Grimes; Daughter: Renae Grimes-Tipton and husband, Josh; Son: Elias Grimes; Brother: Bill Grimes and wife, Mary; Sister: Mary Ellen Grimes; Grandson: Eli Tipton; Granddaughters: Haylie Tipton, Maylee Tipton; Special friends: Paul Baxter, Colin Baxter; Numerous nieces, nephews, cousins and friends. The family would like to offer special thanks to Mary Beth Byrd, FNP and the staff of Family Medical Associates for their love and care during this difficult time. The family respectfully requests the honor of your presence as we offer tribute and remember the life of Robert Edward "Bob" Grimes in a graveside committal service to be held at1:00 pm on Monday, October 5, 2020 in Evergreen Cemetery. Reverend Paul Baxter will officiate. Those attending will meet at Evergreen Cemetery by 12:50 pm for the service. In lieu of flowers, the family requests that memorial donations be made in Bob's name to one of the many charities that he donated to regularly: St. Jude Children's Research Hospital, 262 Danny Thomas Place, Memphis, TN 38105; The American Heart Association, 7272 Greenville Avenue, Dallas, TX 75231; The Humane Society of the United States, Dept. HACDQ100904001, 1255 23rd Street, NW, Suite 450, Washington DC 20037; American Cancer Society, PO Box 22478, Oklahoma City, OK 73123. Condolences and memories may also be shared with the family and viewed at www.valleyfuneralhome.net or on Facebook at https://www.facebook.com/ValleyFuneralHomeErwin. These arrangements are made especially for the family and friends of Robert Edward "Bob" Grimes through Valley Funeral Home, 1085 N. Main Ave., Erwin, 423-743-9187.

Robert Edward "Bob" Grimes, age 72, of Erwin, passed away on Wednesday, September 23, 2020 at Johnson City Medical Center. A native of Unicoi County, Bob was the son of the late William and Lola Grimes. He retired from Nuclear Fuel Services... View Obituary & Service Information

The family of Robert Edward "Bob" Grimes created this Life Tributes page to make it easy to share your memories.

Send flowers to the Grimes family.