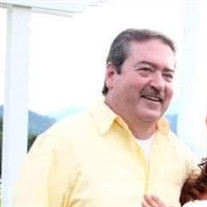 Robert L. Harris, age 61, of Erwin, was welcomed into Heaven by his father Wayne Harris, brother Eddie Harris, mother-in-law Louise Garland, grandparents, brother-in-law Scott "Scruffy" Wilson and most importantly his Lord and Savior Jesus Christ, on Friday, April 1, 2022. He fought a heroic 8-year battle with cancer. Robert was born on January 4, 1961 to Edward Wayne Harris and Mary Katherine Brown. He was employed by Nuclear Fuel Service for 40 years. He met the love of his life, Teresa, shortly after, when she was hired on at NFS and his life as husband, father and grandfather began to take shape. During their 38 years of marriage, they had three children: Nia Rice (Billy), Katherine Bagby (Jared), and Nick Harris (Shae). His family meant more to him than anything else in the world and he was unendingly proud of his six grandchildren: Jonathan, Jackson, Logan, Luna, Ellie Lou and his newest grandson, Broncs Wayne. Robert was a hard worker, dedicated and determined to provide for his family and give them the best life he could. He loved to entertain and spend time with friends and family. He enjoyed music and karaoke, which always included his special song to his wife "When a Man Loves a Woman". In addition to his wife Teresa, mother, children and grandchildren, he leaves behind to cherish the many memories: his sister Tanya Griffith (Keith), brother David Harris, step-father Mack Brown, sister-in-law Rossanna Aldrich (Jeff), nieces and nephews Richard (Rae), Stephen (Natosha), Megan, Adam, Jamie, Tavia, and several great-nieces and nephews. Robert was blessed to have been cared for by his friends Dr. Charles Famoyin and staff at Quality-of-Life Healthcare. He had a special relationship with his provider Sarah Hammons and nurse Connie Pate. The family respectfully requests the honor of your presence as we offer tribute and remember the life of Robert L. Harris in a funeral service to be held at 7:00 pm on Tuesday, April 5, 2022 in the chapel at Valley Funeral Home. Reverend David Effler will officiate. A visitation period to share memories and offer support to the family will begin at 5:00 pm and will continue until service time on Tuesday. The family will attend a private graveside service in Haynes Cemetery. Serving as active pallbearers will be Nick Harris, Jared Bagby, Billy Rice, Richard Thomas, Stephen Wilson and Jeff Aldrich. Honorary pallbearers are his best friends Jack Gaddy and Kenny Ray. The family requests that in lieu of flowers you consider making a donation in Robert's memory to the Shriners Hospital, where his granddaughter Luna continues to be blessed with amazing love and care. Condolences and memories may be shared with the family and viewed at www.valleyfuneralhome.net or on our Facebook page at www.facebook.com/ValleyFuneralHomeErwin. These arrangements are made especially for the family and friends of Robert L. Harris through Valley Funeral Home, 1085 N. Main Ave., Erwin, 423-743-9187.

The family of Robert Lynn Harris created this Life Tributes page to make it easy to share your memories.

Send flowers to the Harris family.