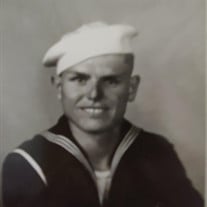 Robert E. Peake Jonesborough, Tennessee September 14, 1925 - January 31, 2022 Robert was born in Erwin to the late Carl and Vista Peake, descendants of early settlers of Roan Mountain. He was the oldest of six children and preceded in death by his only sister, Joy Peake Blair. His surviving brothers are Carl (Gray), Bill (Erwin), Charles (Charlottesville, VA) and Jim (Cleburne, TX). Robert is survived by his wife of 75 years, Esther Arrowood Peake, and loving family: children, Fred Peake (Diane) and Carolyn Tilson (Wade); grandchildren, Mark Seyler (Kelly), Alison Saleeby (Luke), Ashley Kohlrus (Matt), and Victoria Poteete (Nathan); 11 great-grandchildren and a large extended family. Robert served in the US Navy on the USS Dunlap during World War II. He loved to share the story of the Dunlap's responsibility for transporting President Roosevelt to Hawaii and Alaska during the war. His tour included campaigns in the Atlantic, the Mediterranean, and the Pacific. Robert maintained lifelong connections with his crewmates through reunions for the Dunlap. When he returned to East Tennessee, Robert worked for Clinchfield/CSX Railroad until his retirement in 1985. Robert loved to work on the land, farming and building. His building efforts included work on two churches, Gravelly and Oak Hill, where he faithfully served. Graveside service will be held at Evergreen Cemetery in Erwin on Saturday, February 5, 2022 at 1:00 pm. A gathering at The Bramble in Erwin will immediately follow. The family asks that any memorial be in the form of contribution to a veteran support organization. Due to the COVID-19 pandemic and the recent rise in numbers, and for the safety of our families, guests and staff, we ask that masks or facial coverings be worn and all safety protocols be followed while attending any services held. Condolences and memories may be shared with the family and viewed at www.valleyfuneralhome.net or on Facebook at FuneralHomeErwin. These arrangements are made especially for the family and friends of Robert E. Peake through Valley Funeral Home, 1085 N. Main Ave., Erwin, 423-743-9187.

Robert E. Peake Jonesborough, Tennessee September 14, 1925 - January 31, 2022 Robert was born in Erwin to the late Carl and Vista Peake, descendants of early settlers of Roan Mountain. He was the oldest of six children and preceded in death... View Obituary & Service Information

The family of Robert E. Peake created this Life Tributes page to make it easy to share your memories.

Send flowers to the Peake family.