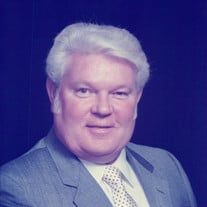 Tom Colbaugh, age 83, of Erwin, passed away on Thursday, May 21, 2020 at Christian Care Center of Unicoi County. A native of Elizabethton, Tom is a son of the late John Samuel and Gladys (Steffey) Colbaugh, Sr. He was a member of First Christian Church of Erwin, where he served as Deacon for several years. Tom was a proud veteran of the United States Army. He was previously employed by Volunteer Gas Company in Johnson City, TN; EP Copeland and Company, Knoxville, TN; Unicoi Gas and Utility District in Erwin, TN, where he was the Service Manager; and he owned and operated his own Heat and Air Company for approximately 15 years. Tom served on the Board of Directors for both the Unicoi County Gas Utility District and Erwin Utilities. He loved his Boston Terriers, playing golf and telling stories. He also cared for Blood Hounds. In addition to his parents Tom is preceded in death by 3 brothers: Bob Colbaugh, Sam Colbaugh and Rex Colbaugh; and 3 sisters: Jeanette Colbaugh, Cristine Carriger and Faye Colbaugh. Tom Colbaugh leaves behind to cherish his memories: Love of his life and wife of 54 ½ years: Lynn Colbaugh; Brothers: Ted Colbaugh, Roy Colbaugh; Sister: Louise Street; Several nieces and nephews. The family respectfully requests the honor of your presence as we offer tribute and remember the life of Tom Colbaugh in a graveside committal service to be held at 2:00 pm on Tuesday, May 26, 2020, in Evergreen Cemetery. Reverend Todd Edmondson will officiate. Those attending should meet at Valley Funeral Home by 1:30 pm on Tuesday to go in procession to the cemetery. Serving as pallbearers Dana Campbell, Ray White, Gary Amos, Brad Thelen, Larry Erwin, Kyle Dover, David Shults, Lee Brown, Bart Ray, Ernest Cunningham and Phil Erwin. Condolences and memories may be shared with the family and viewed at www.valleyfuneralhome.net or on our Facebook page at www.facebook.com/ValleyFuneralHomeErwin. These arrangements are made especially for the family and friends of Tom Colbaugh through Valley Funeral Home, 1085 N. Main Ave., Erwin, 423-743-9187.

Tom Colbaugh, age 83, of Erwin, passed away on Thursday, May 21, 2020 at Christian Care Center of Unicoi County. A native of Elizabethton, Tom is a son of the late John Samuel and Gladys (Steffey) Colbaugh, Sr. He was a member of First Christian... View Obituary & Service Information

The family of Tom Colbaugh created this Life Tributes page to make it easy to share your memories.

Send flowers to the Colbaugh family.